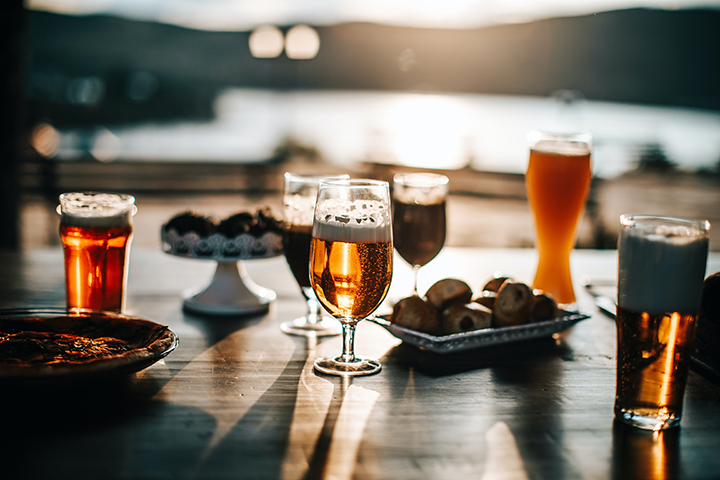 Breweries are as popular in the state as buckeyes but taste so much better! There’s considerable German influence in this state, much of it reflected in the beer-making and serving arena.

For more than 150 years, guests have been patronizing the various establishments housed in this building, placed on the National Register of Historic Places in 1976. Sit under a century’s growth of grapevines in its world-renowned beer garden and lift a stein filled to the frothy brim with any one of the dozen or so beers on tap. Beers include traditional German lagers, dunkels, hefeweizen and pilsners. The food menu captures the best of German cooking — potato pancakes, sauerkraut balls, Bavarian-style pretzel, and sausages galore.

If you’re looking for a place to have some fun and a beer, this is it. The beer garden, connected to the golf center, is a full-service bar that showcases authentic German food and local craft beers. Brats and pretzels are featured. While you’re there, test your mettle at the giant Jenga game or your skill at corn hole, play some miniature golf or hit the batting cages or driving range.

You’ll find this traditional beer garden on a small Lake Erie island where sailors used to “put into the bay” when the weather got hazardous. Three sizes of beer - 12oz, 1/2 liter, and liter - will slake any thirst. Choose from a pilsner, lager, or pale wheat brew. A house specialty is a German Radler and a Warsteiner Pilsner with fresh-squeezed grapefruit. The menu highlights include pretzel bun sausages, potato cakes, and a Bavarian-style pretzel served with house mustard and queso blanco. Don’t miss the Apfelstrudel or German chocolate cake. Finally, burn off some calories with a rousing game of corn hole.

The toll of the firehouse bell doesn’t summon firefighters to this restored fire station, but the beer on tap does summon visitors. The vibe at this 3,000 square brewhouse is described with the German word gemütlichkeit, a good-natured sense of friendliness. The menu is a mix of German-style lagers and pilsners and European-inspired food. Order a flight for a quartet of favorites. With fire pits for cool evenings, the open-air beer garden is welcome to patrons, children, and dogs. All ordering is done online, so come prepared.

Located in the heart of the city, this is the first locally owned and operated brewery in town in more than 50 years. Unfortunately, that’s a long dry spell for those who love hand-crafted beer! Fortunately, since its opening in 2010, this spot has been a local favorite. The company’s award-winning beer is always on tap and those from more than 30 other large and small-batch breweries from around the state. The garden area is expansive, ideally suited for intimate dates or large group gatherings. In addition, the panoramic views from the rooftop patio provide a new perspective on the city below.

Beer-loving history buffs will find a home at this brewery, housed in a historic building with a museum that showcases the state’s beer history from its earliest days through prohibition and into the modern-day. Tours take about an hour and end with a beer tainting and a souvenir glass for home. The beer garden is open through all seasons. The summer highlights its open-air freshness, and then winter transforms it into the quintessential cabin refuge. So many types of beer to choose from it won’t be challenging to find a favorite. The food menu is eclectic.

The refurbished barn of this brewery fits right into the spectacular Ohio countryside on display from its outdoor biergarten. Rustic charm is all around, from wood-lined walls to antique-style light fixtures to picnic tables, inside and out. They serve the beer they produce. Topping the favorites list is a salted caramel coffee ale, a drunk’n monk Belgian pale ale, and a dirt track kolsch, all on tap. Then, of course, there’s a pretzel on the menu, plus burgers, pizzas, and sliders. Growlers are available to take home.

It seems appropriate that this biergarten is found in a historic section of the city known as German Village. The same family has run this longtime fixture in the Village since 1939 — the Planks. You’ll find ten beers on tap, plus a good bottle selection. The outdoor garden area,  a little bit in and a little bit out, is ringed by old brick tree-lined walls… a cool spot in summer. Food is standard fare, pizza, burgers, sandwiches, and salads. If you haven’t had a beer and fried bologna sandwich in a while, this is the place to go! Trivia night on Tuesdays.

This venue is in a historic public market, an iconic city landmark in operation for decades. The outdoor patio gives patrons a bird’s-eye view of the hubbub of visitors to this community venue. Christian Moerlein, a local brewery, sponsors the beer garden. Beers on tap vary but, of course, including IPAs, pilsners, stouts, and ales, representing other local craft beers. Food is found throughout the market, find your favorite, grab a beer and a spot on the patio and watch the world go by.

They are the oldest microbrewery in the Midwest. Its storied history, beginning in 1843, includes changes in ownership, a “near beer” undertaking during prohibition, a shut down during the Great Depression, and a reopening in the late 1990s. Through it all, the beer produced was exceptional. Favorites today include the Portsmouth Pilsner and  Red Bird Ale, both on tap. There’s plenty to choose from on the food menu, but a mix of appetizers — breaded cheese curds, pickle fries, pretzel and beer cheese, loaded pub fries — and a flight of four different beers make for a delicious meal.

View more Ohio Bars and Saloons.
Select a Ohio town to find
the Best Things-To-Do and Places To Go around you