The 10 Best Places for Live Theater in Ohio! 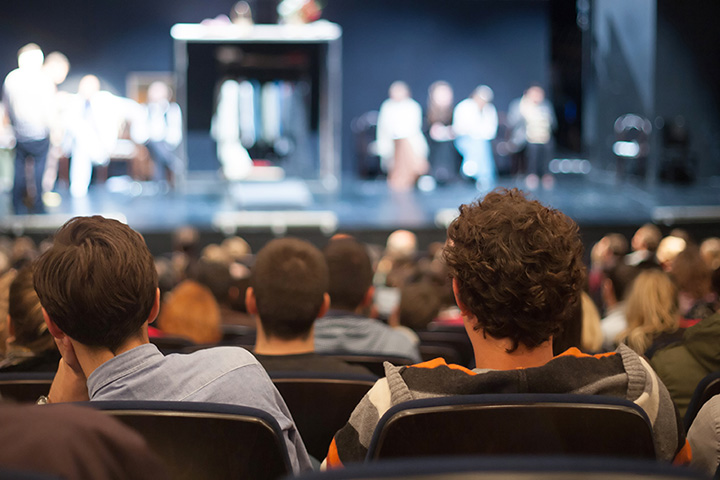 Live theater is something everyone should experience in their lives. Fortunately for Ohio natives and visitors, the rich theater scene of the state gives you plenty of opportunity to do so! Whether you want to get your laughs from a professional comedian, watch a classical ballet, or enjoy some Shakespeare, Ohio's got a place for you. Here are the 10 best places to see live theater in Ohio!

The Akron Civic Theater was built in 1929, and is one of only five remaining atmospheric theaters in the country where star-lit sky can be seen from the inside while watching a show. The theater was restored and expanded in 2001 for just over $19 million and a new outdoor performance venue was added that now features more than 80 events and attractions every year in addition to the performances in the main theater.

The Columbus Theater was established in 2003 and they've been providing a place for the theatrical, musical, and performance arts events for anyone who has the interest. They feature weekly performances of everything from Rodgers and Hammerstein to the Shen Yun Performing Arts, a celebration of thousands of years of Chinese culture.

The Weathervane Playhouse has been in business since 1969, but for the first 20 years, they operated out of a modest carriage house barn. It's been a long time since the barn, but the spirit and the passion for the arts that was formed there has never disappeared. Today, the Weathervane puts on plays, musicals, and speaking engagements with some of the nation's top productions, and offer classes for people who want to get into the arts.

The Playhouse Square in Cleveland is the nation's largest performing arts center outside of New York. They operate as a not-for-profit performance center that seeks only to engage its audiences in shows that make them think and feel. They put on over one thousand annual events on their stage. Being a not-for-profit performing arts center, they wouldn't be able to stay open without the support of their community, but for over 40 years, the community has been happy to do just that.

The Porthouse Theatre has been entertaining audiences for nearly 50 years, and has now finally been declared as an official landmark for the Northeast Ohio arts. Located at Kent State University, the Porthouse Theatre has gathered students and professionals from across the country to produce more than 3,000 performances of more than 175 productions, for almost 400,000 audience members over the course of over four decades.

The Stranahan Theater features everything from bands, to concert pianists, orchestras, musicals, plays, and any other live theater experience you could want to check out. And they don't discriminate by genre. You could see Rob Zombie one night, and “Cinderella” the next!

The La Comedia in Springboro puts their focus on bring funny and family-friendly plays to the community for people of all ages. They find their cast for each play by holding open auditions to anyone who's interested, and they put on plays that are both small productions and world-famous, like “Beauty and the Beast” and “Fiddler on the Roof.”

The Ohio Star Theater is owned and operated by the Dutchman Hospitality Group who have been celebrating Amish culture and sharing it with the community since 1969 when they opened up a 75-seat family restaurant. The theater hosts local, national, and world-famous music artists, as well as featuring plays that focus on the simple lifestyle with hometown characters.

Playhouse in the Park, Cincinnati, OH

The Playhouse in the Park in Cincinnati is located on a hill overlooking the beautiful downtown Cincinnati cityscape. They have been offering performances for the residents of Cincinnati and the surrounding areas for over 56 years, and have become a nationally known theater for their standards of excellence in terms of commitment to top-notch writers, directors, actors, and plays.

The Workshop Players Theater has been putting on shows since the summer of 1947. The current home of the Workshop Players is a one-room schoolhouse in Amherst Township. They are the oldest continuously operating arena theater in the state of Ohio.

11 West College Avenue, Westerville, OH
The Mission of Generations Generations is dedicated to nurturing the child's spirit through the art of dance. -educating through discipline, te... Read More

53 North Union Street, Delaware, OH
About Us: At PADC, your child will get the best dance education in the area from highly trained and experienced professionals. Through dance, ki... Read More

464 Sherwood Downs Road South, Newark, OH
Mission Statement:The purpose of this statewide service organization shall be to promote excellence and creativity in live theatre by providing its... Read More

276 West Center Street, Marion, OH
Built in 1928 and renovated in 1976, this atmospheric theatre surrounds the audience with a Moorish courtyard and the feeling of being entertained ... Read More

36 North Park Place, Newark, OH
History: The theatre stood empty and virtually unused for two decades. But for fifty years, The Midland was alive … alive with the sounds ... Read More

1187 N High Street, Columbus, OH
The beauty of live theater is in bringing people together. Our goal at Short North Stage is to do that in a meaningful way. Whether you are in the ... Read More

PO Box 803, Pickerington, OH
Mission Statement Posted on February 14, 2011 by Admin To preserve, promote, and perform all types of living theater in the community. To welcome... Read More

512 Park St, Columbus, OH
Mission: To enrich the lives of families and children through theatre. CCT is committed to the proposition that the best way for young people to u... Read More

34 West Broad Street, Columbus, OH
A Touch of FranceDesigned in the spirit of France’s Palais de Versailles, the 2,827-seat Palace Theatre is located at the base of the LeVeque... Read More

1000 City Park Avenue, Columbus, OH
Mission Statement:Actors' Theatre of Columbus celebrates the possibilities of classic theater and literature, leading our diverse community in arti... Read More
Show More
Select a Ohio town to find
the Best Things-To-Do and Places To Go around you