The Top 14 Historical Sites in Ohio! 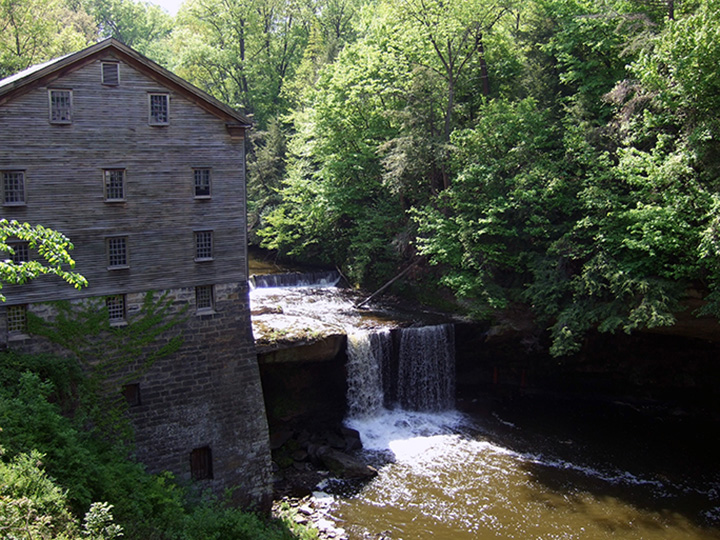 Ohio has been witness to some of the most important historical events and people in the country. Luckily, the Buckeye State has been vigilant about preserving and memorializing history whenever possible, so there are dozens of fascinating historical sites you can visit in Ohio today! Here are our 14 favorites.

Tour the birthplace and museum of the man who invented the lightbulb, the phonograph, and more. Admission in $7 for adults, $6 for seniors, and $5 for kids. You can take guided half-hour tours and learn everything there is to know about Edison.

Fort Meigs was the Ohio battlefield where the War of 1812 was fought. It withstood two sieges by British, Canadian, and Native American forces. Reenactments and an authentic environment are enough to take you back in time to experience life as it was in 1812.

Perry's Victory and International Peace Memorial honors those who fought the Battle of Lake Erie in the War of 1812, and celebrates peace for Britain, Canada, and the United States. The memorial is located nearby several other historical sites, so you can visit here and stop over at the James A. Garfield National historic site or the River Raisin National Battlefield Park.

One of Ohio's biggest points of pride is being the birthplace of Wilbur and Orville Wright, who invented the airplane. The Dayton Aviation Heritage National Historical Park honors their achievements in aviation and celebrates all the advancements that have taken place in the years since.

Hopewell Culture National Historical Park is home to dozens of mysterious mounds and earthworks along the Scioto River. The mounds were discovered by settlers in the late 1700s and are believed to have been part of an ancient religious ceremony.

The Great Serpent Mound is the largest serpentine effigy mound in the world. It winds its way through trees on a cliff overlooking the Brush Creek valley. The serpentine mound is about 1,330 feet long and three feet tall. There are many theories as to its origin and meaning, but the true origin is lost to time.

The tomb of 9th president, William Henry Harrison is now home to a museum and monument to honor the American hero. President Harrison was laid to rest in the tomb in 1841, overlooking the winding Ohio river valley where he was born.

Legendary Civil War General and two-term American President, Ulysses S. Grant was born right in small-town Point Pleasant, Ohio. Now you can visit the house where he was born and hear the story of his life and his rise to becoming an American legend.

The USS Cod Submarine memorial honors the USS Cod SS-224 World War II Fleet Submarine and is a National Historic landmark. Take a tour of the sub and learn all about its epic and storied history!

The Stan Hywet Hall and Gardens displays a remarkable 65-room Tudor Revival manor house, a Gothic Revival conservatory and a gate lodge, all offering tours frequently. The Hall and Gardens sit on about 70 acres of beautifully-landscaped area with immaculate gardens.

SunWatch is the original site of an 800-year-old Native American Indian village where you can learn about the history of the tribe and enjoy the outdoors. They offer events all year-round for adults, children, communities, and schools to help people get involved in education and preservation.

The William Howard Taft National Historic Site honors the American President and former Chief Justice in Taft's birthplace and childhood home. The house has been restored to its original condition and reflects life as it would have been for the Taft family during Taft's boyhood years.

Lanterman's Mill is a historic landmark built in the mid-1840s and restored in the 1980s for the community. Observe the pioneer lifestyle as they grind grains into meal and flour, or browse the gift shop and find some authentic old-world flours, cornmeal, and souvenirs.

Carillon historical park showcases the industrial innovations of the region throughout the years and contains dozens of museum buildings and countless artifacts. The park is open year-round excluding major holidays, and charges $8 for adult admission, $5 per child, and $7 per senior.

11 East Sandusky Street, Fredericktown, OH
The Village of Fredericktown, Knox County's largest village was platted in 1807 by John Kerr, operator of the first mill there. Lucas Sullivant, a ... Read More

221 East Broadway, Granville, OH
The nationally acclaimed Greek Revival house was built in 1842 by Alfred Avery, one of the founders of Granville Ohio. The house was added to over ... Read More

169 East Church Street, Marion, OH
About Us: The Wyandot Popcorn Museum opened in early September of 1982, just prior to the 2nd annual Marion Popcorn Festival. Not only is it the o... Read More

990 Proprietors Road, Worthington, OH
Mission Our mission simple: education and preservation. About Founded in 1948, The Ohio Railway Museum is one of the oldest railroad museums in ... Read More

169 West Church Street, Newark, OH
The Museum has been owned and operated by the Heisey Collectors of America, Inc. (HCA) since 1974. Located in Veterans Park in downtown Newark, Ohi... Read More

480 East Broad Street, Columbus, OH
Misson and Values: Community: Means we’re open to all and celebrate the rich diversity of our stakeholders – from staff, volunteers, a... Read More

586 East Town Street, Columbus, OH
A sense of place kept the Kelton family in their grand Victorian townhouse for nearly 125 years. That attachment laid the foundation for a museum t... Read More

4729 Walnut Road, Buckeye Lake, OH
The Greater Buckeye Lake Historical Society Museum, there have been over 17,000 visitors to the museum since our opening day in 1998. Come visit th... Read More

5075 South Hamilton Road, Groveport, OH
About Us:   Motts Military Museum was founded in 1987 by Warren E. Motts of Groveport, Ohio who established the museum as a 501 (C) 3 not fo... Read More
Show More
Select a Ohio town to find
the Best Things-To-Do and Places To Go around you